Just a Closer Walk With Thee

from Just a Closer Walk With Thee by The Emotional Carpenters 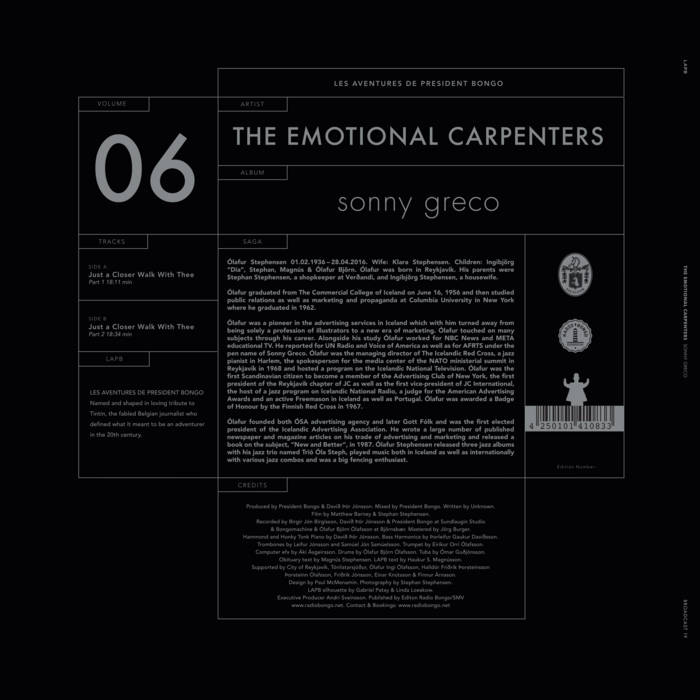 Just a Closer walk With Thee is a tribute to Ólafur Stephensen, my dad, a jazz lover and advertising man who passed away in 2016. The piece is an American folksong; a New Orleans funeral march. The film describes in an abstract way a funeral but at the same time a new beginning, a lifespan and freedom.

from Just a Closer Walk With Thee, track released December 4, 2020
Les Aventures de President Bongo Presents:
A Film by Matthew Barney and Stephan Stephensen and an album by The Emotional Carpenters.

“Just a Closer Walk with Thee”

Music performed by The Emotional Carpenters
Written by Unknown

In loving memory of Ólafur Stephensen

“Just a Closer Walk With Thee”

Sharpen your senses; prepare to open your heart and your mind. Rejoice! You are invited embark on a journey across the entire universe, from the peaks of Mt. Kilimanjaro to the innermost core of your being. Led by the emotional carpenter himself—Mr. Stephan Stephensen, AKA President Bongo—and accompanied by his merry band of hand-picked accomplices, Les Adventures de President Bongo is a unique work of art that will reveal itself over the next ten years, give or take. One film is made to accompany each release.

Named and shaped in loving tribute to Tintin, the fabled Belgian journalist who defined what it meant to be an adventurer in the 20th Century, Les Adventures de President Bongo is a bonafide objet d‘art. Each of the 24 LPs is limited to a run of 300 copies (numbered and signed), once the cycle is complete, the individual releases will Voltron into a unified whole that is projected to surpass the sum of its parts.